Marriott International, Inc. is a leading global lodging company with more than 6,700 properties across 130 countries and territories all around the world. Since it’s inception as an A&W root beer stand Marriott has conducted its business based on five core values: put people first, pursue excellence, embrace change, act with integrity, and serve our world. As a world leader in the Hospitality industry, Marriott has always been at the forefront of interior design. The design of communal spaces, and the colors and shapes of the furniture and fittings that inhabit them.

This care and attention to detail are a major factor in the style of art, and artistic installations, displayed. Art in hotels, however, suffers from one major setback. A reputation as being bland, boring, and generic. Seeking to help change this, and as a leader of technological innovations in hospitality, Marriott is keen on integrating emerging technologies with artistic endeavors to ensure its properties are a healthy mix of traditional techniques, and technological wonders. In the spirit of this endeavor, Dreamspace partnered with the Innovation Lab in the Marriott Bethesda Head Quarters in DC to produce a sweeping, epic, interactive installation.

The concept and design of the installation was based on a foundation of five core ‘pillars’:

EXCELLENCE - Pursuit of perfection, attention to detail and finely tuned visuals of data analytics, based on statistics provided by Marriott

CHANGE - Art is ever evolving, and so should this installation be. Changing/morphing colors, lines, particles, shapes, numbers, and images representing a harmonic shift in time and space.

INTEGRITY - Honesty, truthfulness, and accuracy of ones actions; a moral uprightness.

WORLD - The power of global connections, and Marriott’s global network.

While the code for the installation was being written this animation was carefully designed and created to tease the interactive installation to come. The animation representing streams of data and connectivity between Marriott’s many properties. Illustrating the relationship between Marriott's customers' shared positive global experiences, the electric lines gently and consistently travel back and forth between ‘Data spheres’. Using a network of Mac Mini computers, this video was displayed using 6 interconnected projectors, along a hallway measuring almost 100ft. Animation was configured to overlap and merge seamlessly between each projection. 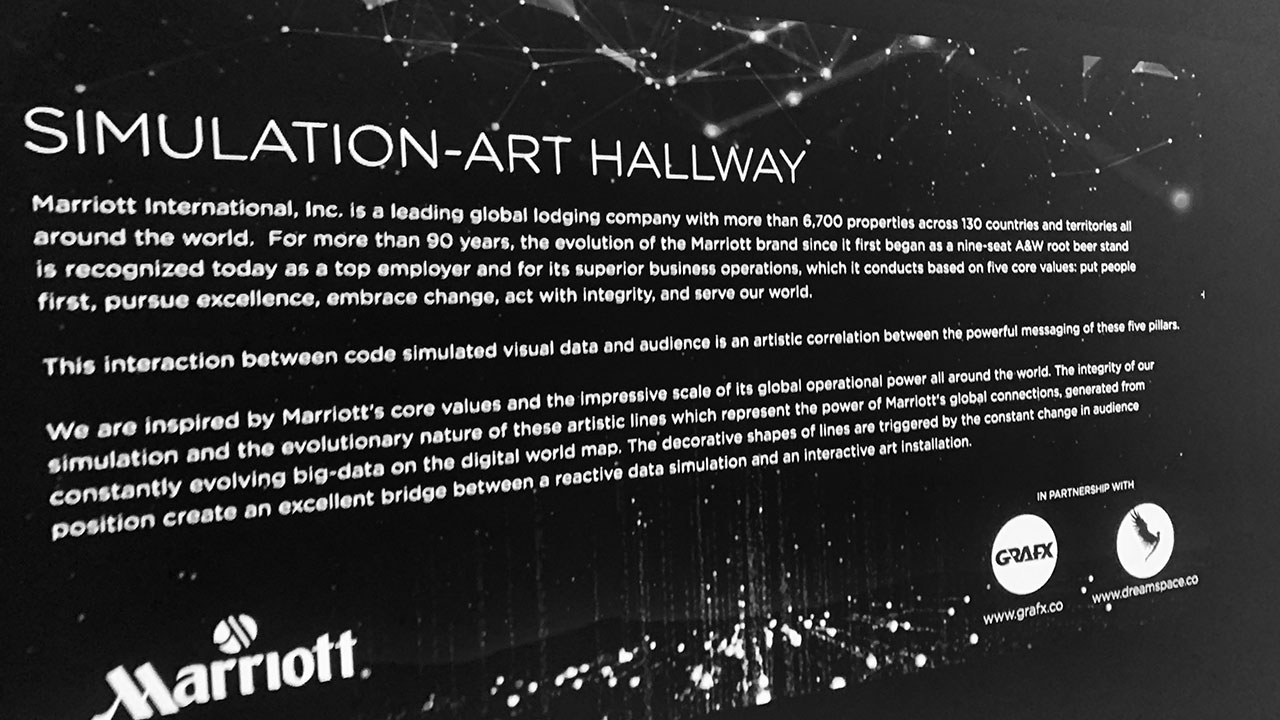 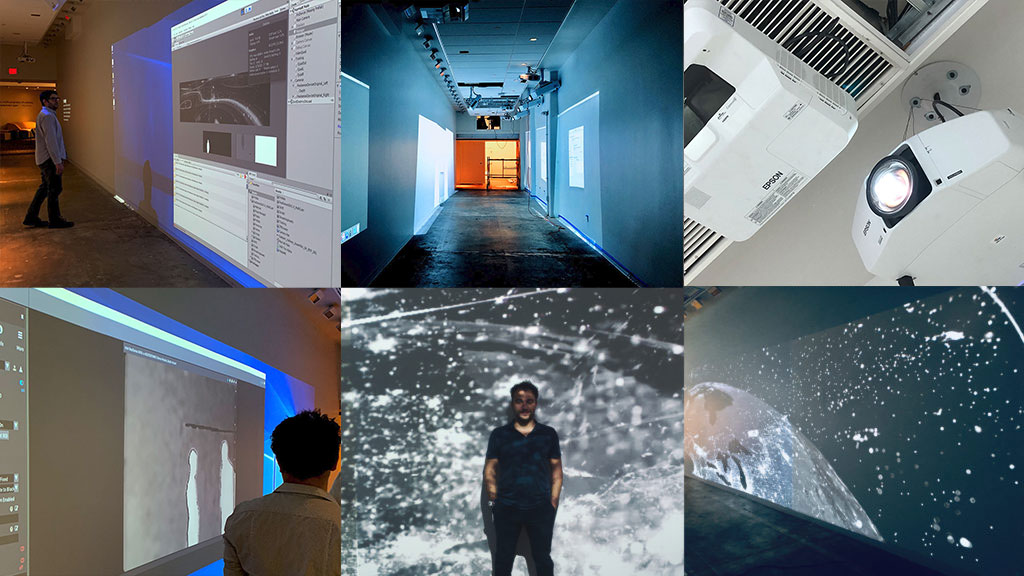 We partnered with Unity, and Intel using their RealSense Depth Camera / Sensors to retrieve depth and position data. Capable of recognizing multiple users at once, this meant the piece was truly interactive, with the actions of one user directly affecting the interaction of others in the corridor. Using unique and specially written code, and built using the Unity game engine, this piece is truly bespoke.

At it’s base the “default screen” of the installation is a globe made up of dots representing data from Marriott’s global network of customers, and infrastructure. For centuries, visual displays in the form of maps and images provided a critical Interface to information about the world. Now, however, emerging technologies create the potential for multimodal interfaces—involving not just sight but also other senses, such as hearing, touch, gestures, gaze, and other body movements—that would allow humans to interact with geospatial information in more immediate and “natural” ways. As users traverse the hallway they create a swarm of data points that proceed to follow them in their journey. These data points, representing data from the customer themselves, are constantly in motion, interacting with the data points of the map, distending, distorting, and moving the image of the globe. This provides two layers of interaction. One between the user and the installation, and one between elements in the installation itself.